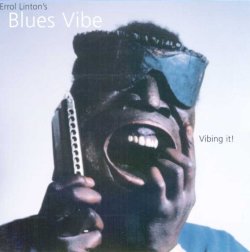 Reggae and Blues are unlikely bedfellows, but Errol Linton's Blues Vibe bring the two together on "Vibing it!" their first CD, and manage to pull it off very successfully. The result is a highly original sound, which is strongly Blues-based, but mixes in lilting reggae rhythms as a backdrop for several of the tracks. Even though nine of the tracks are cover versions, each one is re-interpreted to give it a new lease of life. Who would have thought that you could take Howlin' Wolf's "Howlin' for my darling," for example, and give it a reggae makeover? The choice of covers is interesting too: it's nice to see Papa Lightfoot, J.B. Hutto, J.B. Lenoir, and Frankie Lee Sims all getting a name check alongside the better known Willie Dixon, Howlin' Wolf, and Big Joe Liggins.

After being discovered busking on the London Underground by a BBC producer, Eazy Errol Linton was included in a World Music TV series, alongside the music of Big Bill Broonzy. Errol is a fine harp player, which he amply demonstrates on a version of "Shake for me" which Willie Dixon would have approved of. It has a raucous jug band feel to it, with Jean-Pierre Lampe pounding away on the double bass for all he's worth, while in the percussion section Sam Kelly taps out the rhythm on the bottle, and Tyrone Balkissoon plays washboard.

Linton's harp playing reflects a range of influences including Sonny Boy Williamson II -- he learned to play by listening to his records -- and there are detectable tinges of reggae melodeon players in there too. As well as being a mean harp player, Eazy Errol is a talented songwriter too. The topics of his songs may be fairly standard Blues fare -- love and life -- but he knows how to wrap the lyrics up in an infectiously catchy tune. I found myself continually humming "Packin' my bags" after just one listen, and the driving beat of "Live the life" is simply irresistible.

The tracks on "Vibing it!" were cut live in the studio by the band which has a fairly fluid line-up but is usually a six or seven piece combo here. The outcome is very good indeed, which is testament to the togetherness of the members of the band. The idea to cut it live seems to be part of a growing trend of trying to recapture the live feel of Blues on CD. Check out B.B. King's "Blues from the Bayou," and Snooky Pryor's "Can't Stop Blowin'" for two other fine examples.

"Vibing it!" is just the tonic for the winter months because there's a vibrant warm feel to the music, possibly a result of the Caribbean influences shining through. The end product is a perfect illustration of just how flexible the Blues can be, given half a chance, and should silence any doubters who think the Blues has nowhere left to go. If I owned a record company, I'd sign these boys up on the strength of this highly impressive debut.

The CD is available from Red Lick Records (e-mail: sales@redlick.co.uk) quoting the catalogue number and title, or you can order it directly from the band for £12.00 sterling (plus £1.50 postage and packing if ordering from outside the UK): Errol Linton's Blues Vibe, P.O. Box 22034, London SW2 4WF, United Kingdom.

This review is copyright © 1999 by Gordon Baxter, and Blues On Stage, all rights reserved.

This page hosted by

Get your own Free Home Page